Unable to use purchase of AM 4 RPI mini computer

Support for Air Player desktop on ARM devices, like the Raspberry Pi.

Unable to use purchase of AM 4 RPI mini computer

I purchased the latest version of air manager and the raspberry pi mini computer air player a few months back. I have been unsuccessful in getting the air player to activate as it states I have a wrong product. I cannot find anything on how to fix this and hoping the community has some guidance on what the issue is and how to get it activated and working.

Thank you in advance for any help.

My guess is that you purchased a AM3.7 licence and are trying to run it on AM4

If so check your mail for a mail from SI which contains a coupon for a free update.
If you do not have the email with the discount code you will have to contact @Ralph

Hello Keith,
Thank you again for the rapid fire response as I am hitting my head against the wall on this one. I ordered the airplayer 4 mini computer as seen in the screen shot at the same time I purchased the air manager 4.0 program. I am not sure as to what I am missing, but I have tried just about everything I know of to get this error to go away and to date, been stuck right at this point.

Ive seen similar posts about the wrong product issue, but nothing has sent me on a successful path to getting this registered.

I do have a ticket in with the support team and working with them as well in the interim. If you have any additional suggestions I am willing to give them a shot. 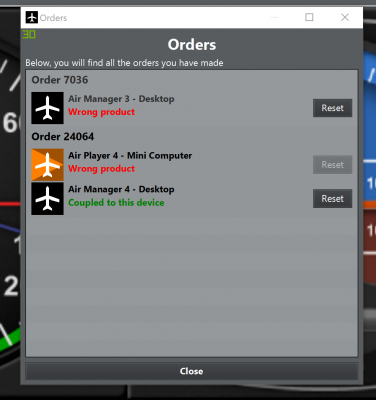 I purchased the latest version of air manager and the raspberry pi mini computer air player a few months back. I have been unsuccessful in getting the air player to activate as it states I have a wrong product. I cannot find anything on how to fix this and hoping the community has some guidance on what the issue is and how to get it activated and working.

Thank you in advance for any help.

…same problem for me, but until now I haven’t no answers to solve this problem!

You are looking at the license window of Air Manager, that's why it says wrong product. The activation of Air Player is done from the Home tab.
Top

Hello Ralph and thank you for responding.

I think I am following you to some degree. The order screen has nothing to do with the actual activation and the wrong product message doesn't really mean much. I managed to get the raspberry PI to show in air manager for a brief moment, but it was showing disabled and locked up the AM program. (could not get back to the normal AM home screen) When I restarted the program, the raspberry symbol was gone and I no longer can connect to AM with the PI. I am beginning to think this is to do with my router and it blocking the IP address but I cannot find the PI address on my network when I scan it. Is there a way to set the IP on the RPI manually? This has be a bit baffled and any pointers are appreciated.
Top

Just a quick update as to what I am running into currently... I am intermittently getting the RPI to show in AM after plugging directly from the computer to the RPI LAN connection. This is very intermittent and I have not been able to isolate what is allowing it to connect sometimes. That being said, I was able to activate the mini computer one of the times it was running, but if I try to use it at all (activate a panel, ect) it greys out everything, shows disconnected and locks up the AM program. I have to restart the AM program to get anything available and working. I will try to post some screen shots of what I am seeing in an effort to better illustrate. I have also attached the last log file from when it connected and then locked up. It appears there is something dropping the connection but I am not sure what would be causing this, as well as the IP address (if that is applicable) is nothing near what my wifi network is.

Thank you again for looking at this and nudging me in the right direction.

Here are some screen shots to help visualize what I am hoping to explain. 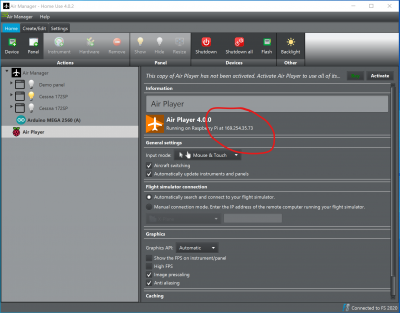 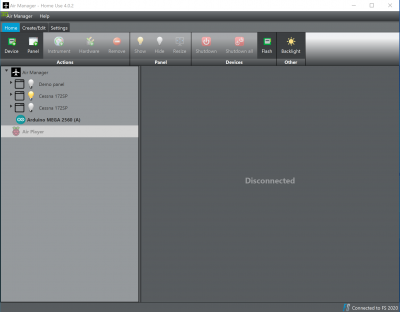 Wante4d to post an update for those of you that may run into similar issues when trying to get the RPI4 up and running with MSFS2020. I now have it successfully running with my sim thanks to the help of the SimInnovation team and alot of painful learning about the RPI platform.

The initial issue, which is what this header is stating was a simple misunderstanding of what the page that showed "wrong product" was about. As Ralph pointed out, this is the initial screen from the home page of Air Manager. The licensing for Air Player is done through the PI Tab, once you have the PI communicating and the raspberry is showing in AirManager. This is where all the confusion began for me. If the PI is not showing in AirManager, you cannot select it to enable the license.....

Due to the fact I am fairly new to anything RPI, I wasn't getting the RPI to connect to my sim computer for a number of reasons. First was that I thought that once I fired it up that it would automatically show up on my wifi network... VERY INCORRECT ASSUMPTION... I found that the base image comes with WIFI turned off until you can SSH into the PI and configure it. There are alot of YouTube videos out there thankfully showing the steps used to do this. The issue I had right here was that I could not get the RPI to connect to my SIM computer even with a direct LAN connection to the NIC card. After trying to set the static IP, and wanting to get the hammer out, I decided to take the PI straight to a LAN port on my router and see if it showed up on the network that way.. Thankfully it did and at this point I was able to get into the PI and set up the WIFI for it. (using "sudo raspi config") Once I did all the items needed to setup WIFI on it, PRESTO! I had the RPI online without the LAN and Airmanager showed it properly....

Now for the final piece that I posted about the RPI going offline or disconnecting....

For anyone that does not know this as I was painfully unaware of... if there isnt and active monitor hooked up to the PI when starting the panel, the PI will shutdown on its own... I was trying to get the PI "running" without a monitor initially and this was the core issue with the PI disconnecting when starting up. Once I had an actual monitor hooked to it, the Airplayer worked flawlessly...

So takeaways from the painful learning curve I went through:

1. I think I am too old to learn this new stuff... LOL
2. When activating a license for anything AirManager related, you must be in the correct tab for the product you are trying to license. (i.e Airplayer RPI-when clicking on the actual airplayer symbol)
3. Initial startup of the RPI does not come with WIFI enabled and needs a hard wired connection to the network to interface with it, including Airmanager program.
4. WIFI will need configured in the RPI if electing to connect that way
5. RPI will not run a panel if a monitor is not connected and will disconnect automatically.

So in a nutshell, there were three different issues here, all related to inexperience and general misunderstanding of basic items... I am now dangerous enough to really break something..

Hope this helps some future AirManager patrons as this product is quite amazing!